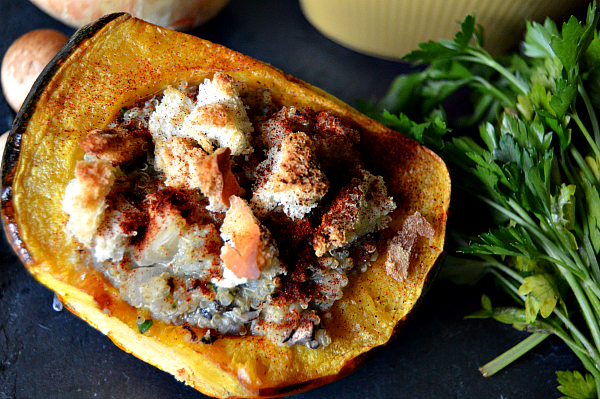 The holidays are quickly approaching! I love this time of year when the weather gets colder and warm drinks become an everyday necessity. I also love being able to spend time with my loved ones. But the holidays are also very emotional and stressful for me as well. During this time of year millions of animals are slaughtered for food or clothing all in the name of cheer, thanks and general goodwill. It's horrifying and it quite literally breaks my heart. Being a vegan has many challenges. A lot of non-vegans seem to be under the impression that going without turkey legs or deep-dished pizza is the hardest thing a vegan will have to deal with. It isn't. The hardest part is watching people you love and care for so much make choices which directly conflict with your own moral compass. Meat is murder to me. I'm not being overdramatic. It's a fact.

The thing on your plate isn't just a meal,  it had a life once. It had a heartbeat. It felt fear. It felt hunger. It felt pain. Even if the person in front of you did not kill the animal with his or her own two hands they are participating in a system which makes such acts of violence possible.
Being a vegan is hard because when you sit at the table surrounded by those you love laughing and sharing stories there is one sound that isn't heard. It's a sound that you hear. It's a sound that haunts you and has changed your life forever. Death wasn't merciful for the animals at your table and their life was not well lived either. They lived in fear. They lived in hopelessness. One might even say they didn't live at all.

Please understand that if you are not vegan I do not think I am better than you. In fact I am far from it. But being vegan isn't just about me or about you. It's about saving lives and preventing unnecessary violence, because meat is unnecessary in our modern diet. You don't need it. You can be healthy and athletic and strong without consuming animal products. So why perpetuate a system rooted in death and destruction? Because it's what we've always done? Because it's what we are comfortable with? Because it tastes good? Because these animals are unintelligent?
I don't think anyone in my country (US) would use these as valid arguments for the slaughtering of dogs or cats. Why then are these used to justify the consumption of pigs, chickens, cows etc?

It's not complicated, and YOU won't die if you give up meat. However, hundreds millions will die if you don't.

And not that I've had my tangent on to the recipe at hand! This Stuffed Acorn Squash is the perfect substitution for the traditional stuffed turkey nonsense. It's also A LOT cheaper, quicker and easier to make. 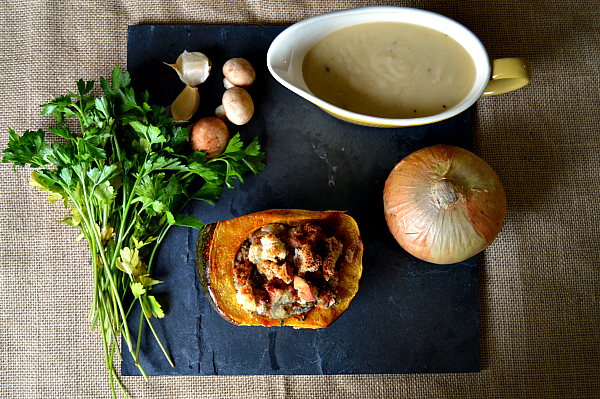 Instructions
1. Preheat oven to 375 and grease a high sided baking pan with olive oil
2. Slice the stem and flower ends off of each of your acorn squashes, cut each in half and then spoon out all of the seeds
3. Drizzle some olive oil over the open faces of your squash halves and then place them down on the baking sheet with the skin side facing up
4. Bake for 30-35 minutes of until the inside half of the squash is tender
5. While your squash is baking you can begin preparing your stuffing
6. In a large skillet sauté garlic, onion and celery on medium heat in olive oil for 5 minutes or until tender
7. Stir in mushrooms and allow it to cook for an additional 3 minutes
8.  Remove vegetables from heat and pour them into a medium sized mixing bowl
9. Stir in Ener G egg (fully prepared), cooked quinoa, parsley and paprika until fully combined
10. Gently stir in bread crumbs leaving a little bit to place on the top of the squash stuffing if desired
11. Spoon stuffing into baked squash halves and top it off with any remaining breadcrumbs that you have left
12. Bake squash with the stuffed side facing up for 7 minutes at 375 degrees 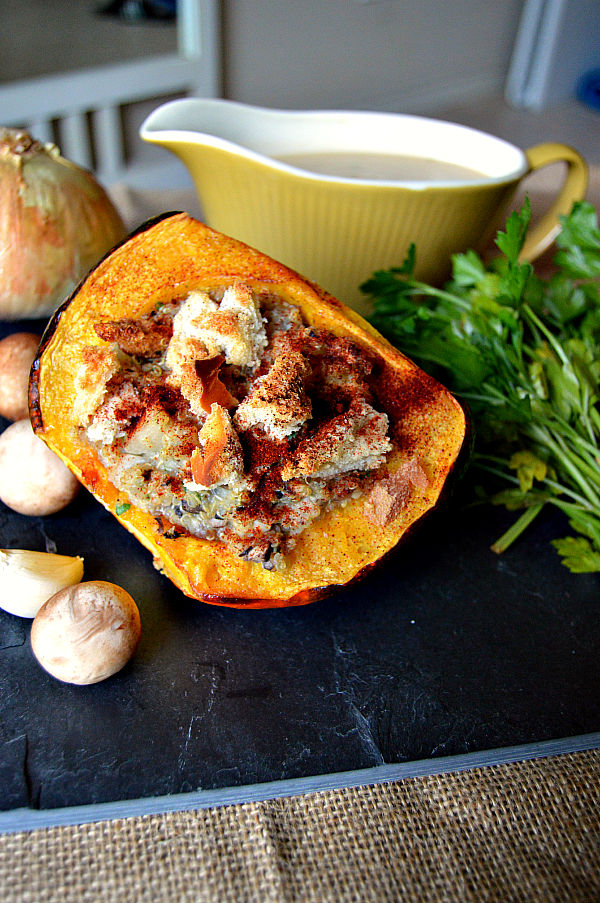