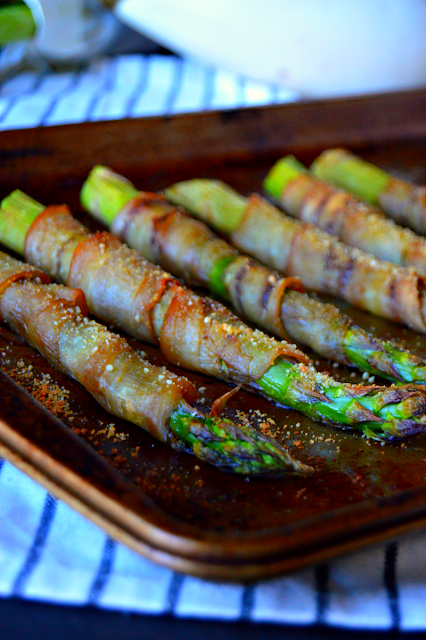 I am so happy to be working with Melissa's Produce to bring you this Bacon Wrapped Asparagus recipe! Melissa's Produce is an online produce company that delivers fresh produce straight to your doorstep. Honestly, their fruits and veggies are absolutely to die for! Last time I worked with Melissa's I brought you these beautiful Chai Roasted Forelle Pears and the Orange Mango Float. I absolutely loved both of those recipes, and as soon as I posted them I couldn't wait to experiment with Melissa's Produce even more. Last Fall I posted this recipe for vegan Jalapeño Poppers with Eggplant Bacon and the internet exploded! Or well at least my little corner of the internet did. People were soooo excited about the eggplant bacon! It's crazy because this plant based knockout actually looks and tastes like the real deal! No lie, my 80 year old grandpa was totally confused when I explained that the Jalapeño Poppers he'd been sneakily munching on were vegan. I'm not sure he fully believed me when I told him his tasty bacon was really an eggplant imposter. 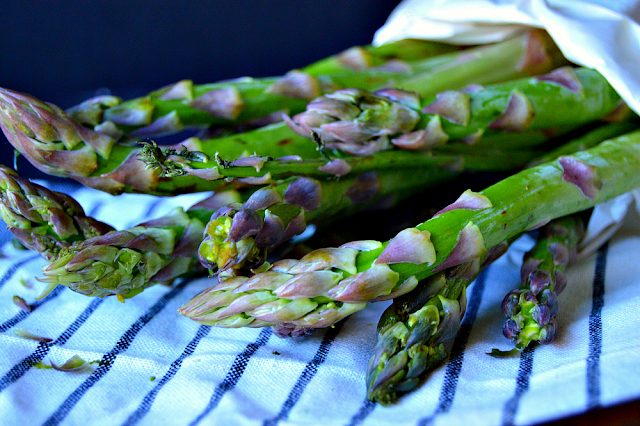 Now as we all know the regular kind of bacon is far from a health food, but it's definitely a stable of the American diet. Since I've been bombarding you all with tasty vegan treats like my S'mores Frappe inspired by Starbucks and my Tiramisu Popsicles, I figured it was time to introduce some healthy munchies. Eggplant has barley any calories or carbs in it, but it has an immense amount of flavor and a great texture when prepared properly, so it's a wonderful and versatile option as a meat substitute. Asparagus too is known for being a beast in the healthy food section, so it seemed like a good idea to pair the two for an appetizer of deliciously epic proportions. This Bacon Wrapped Asparagus is perfect an a finger food for a large social gathering or even as a dish for your smaller brunch parties. Who knows you may even trick your grandpa into thinking the bacon is the real thing! 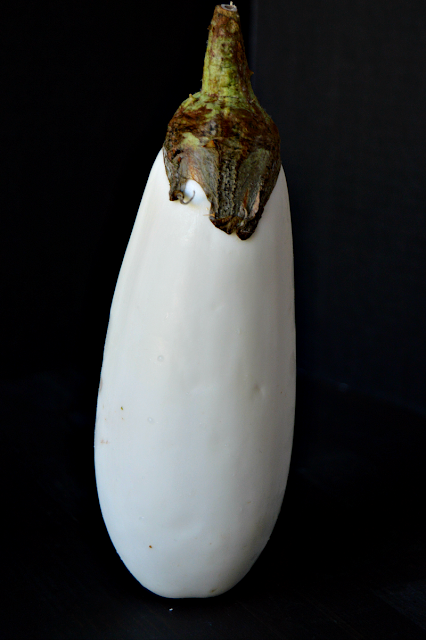 Yields 15-20 Wrapped Asparagus depending on the size of both the eggplant and the asparagus
Ingredients
1 white eggplant from Melissa's Produce
1/4 cup olive oil
2 tbsp liquid smoke
1 tsp brown sugar
1 tsp salt
1 batch asparagus from Melissa's Produce
1 tsp garlic powder
1 tsp salt for sprinkling on top after baking (optional)
Vegan Parmesan Cheese (optional)
Instructions
1. Peel your eggplant then cut it into very thin strips about 1 inch wide.
2. In a medium bowl whisk together olive oil, liquid smoke, brown sugar and salt. Add the eggplant strips to the bowl and coat in the marinade. Cover the bowl and refrigerate for an hour minimum or overnight.
3. Once your eggplant has finished marinating, preheat your oven to 350. Chop the purple ends off of the asparagus and wrap each asparagus stalk with the eggplant bacon. I used about two strips of eggplant bacon per stalk of asparagus. Depending on how long your eggplants and asparagus stalks are you may use more or less.
4. Bake for 15-20 minutes. The longer you bake the crispier your bacon will be. I tend to like mine on the crispy side. Top with some extra garlic powder, salt or vegan parmesan cheese prior to serving.
Serve warm. 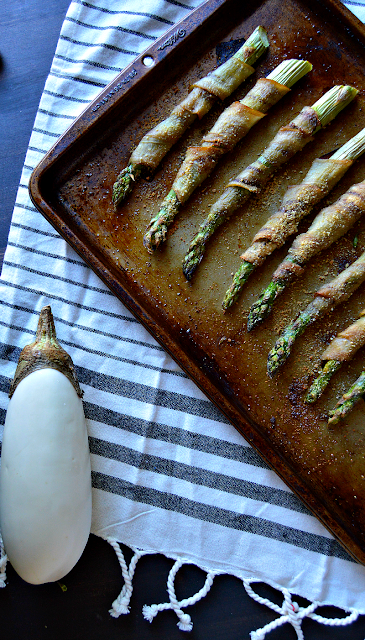 Disclosure: I received materials from Melissa's Produce for this recipe. Posts are truthful, and all thoughts and opinions are my own and not influenced by this sponsorship. Recipe is an original creation by Emilie Melton at looseleafvegan.blogspot.com.
Labels: Food